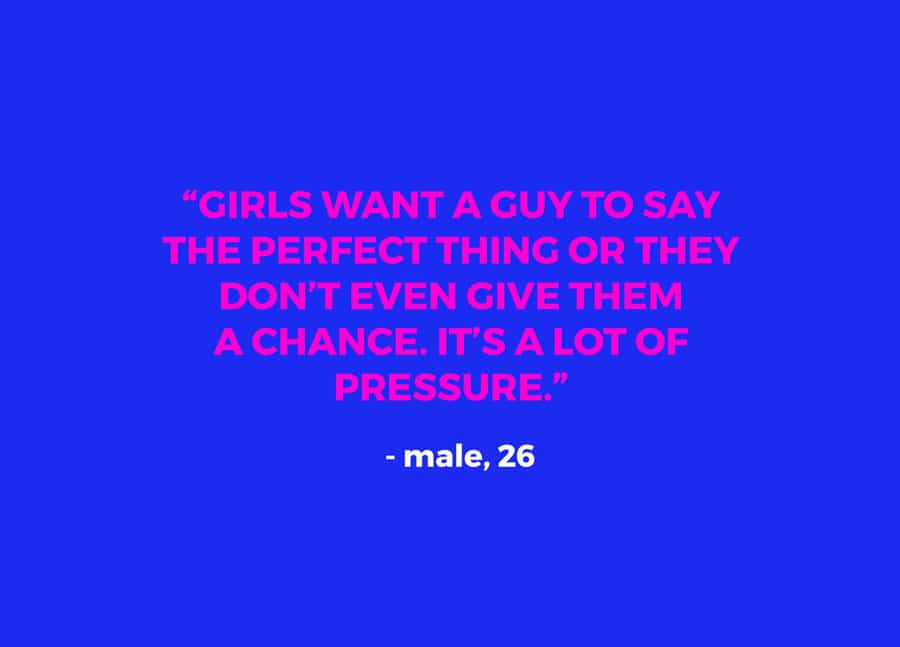 We women can bitch all day about how men of our generation aren’t stepping up to the plate, are ghosting, just want to hook up, don’t open doors for us, etc., *I can go for so long I need a sandwich,* etc. But as a millennial woman, and a writer, I fear that A. We’re having these conversations with each other, not with guys and B. Male voices are being drowned out by all of the complaining and man-hating POV on the internet. We’re so busy pointing our fingers, but have you ever stopped to think:

What am I, as a woman, doing to encourage such disappointing behavior from guys?

Part of Talk To Me means hearing all different points of view to help us understand each other, even if men are from Mars. Sometimes the most enlightening POVs aren’t from celebrities or experts, but from the average, millennial guy next door. The one you could be dating right now.

And probably the guy you’ll end up dating and marrying one day.

I heard from a 26-year-old straight guy on the east coast. He’s currently engaged and willing to share his thoughts to help women understand where some guys are coming from. I gave him a lengthy questionnaire (because obviously) and here is some of his eye-opening input. BTW, I’m guilty of most of these.

1. Ladies, you’re being fickle as fuck.
“I think there is a lot of pressure with making the first move. Girls say they want a guy a nice guy but when a nice guy comes along, they never really are ‘ready’ or he is too nice. If a guy is straightforward, he comes off as a jerk.”

2. You bitch to your friends, but not to the dude pissing you off. So won’t they just keep doing the same shit?
“Our society says we want the truth and to be honest but yet we never give people the truth in return. When a guy texts twice because a girl didn’t answer, he is annoying, yet when a guy doesn’t text, he is playing games.”

3. You ghost too and for some reason that’s OK.
“Girls will say, ‘Oh sorry I didn’t answer’ (for a day or two) and make up an excuse but lets be honest: Everyone checks their phones a million times a day. I think guys and girls both ghost. People in general THINK that it’s better to just not say, ‘Oh hey sorry, I am no longer interested in you.’ If you ask anyone they would say I’d rather hear the truth than not know what is going on. Yet even though that is what we want to hear, we still don’t give that same respect to others.”

4. Guys don’t make a move because you’re making it hard and they’re probably already over it.
“Girls tend to make things very difficult to read. Girls want a guy to say the perfect thing or they don’t even give them a chance to start. It is a lot of pressure. It would help guys know that they are interested and we would feel confident from that point on to continue in a direction we now feel comfortable with.”

5. You’re writing all guys off as fuck boys.
“All guys are different. Depending on where I was in my life, I really wanted someone to settle down with but other times when I was hurt, I would try to rush it and be vulnerable. We all secretly want that relationship but may not be ready. A lot of guys care what other guys think of them and their relationship. I’ve learned that it doesn’t matter, who cares if you openly admit you like to cuddle or like to get your girlfriend cute gifts and be thoughtful? Thats respectful, not lame.”

6. Why you’re single.
“I think a lot of girls are single because they are either too picky or don’t give guys a chance.”

My biggest takeaway from his input: Um, damn. I definitely exhibit most of this behavior. It not only leaves us frustrated and prevents us from getting what we want, but doesn’t teach guys otherwise. And without being honest about what we don’t like or giving guys a chance, the same toxic cycles will happen over and over.

I’m not saying shitty behavior from guys is excusable.

But don’t complain if you’re not willing to work with them and you expect them to just magically read your mind to be the perfect guy.

And by the way, he’s pumped to be married. Even at 26: “This is the first time in my life I don’t feel like I will ever be left out. I know that I will always have someone ready to be active and take on the world with. I love her and feel loved. She makes my heart warm and I want to feel that every day for the rest of my life.”

They met through his sister, he asked her out, they’d get to know each other on the phone, and the rest is history. So there’s hope. And rather blaming guys and getting frustrated over and over, be honest with them and yourself about what you want.

« Why Are Professional Athletes Prone to Cheating? They Weigh in
Are Shitty Men Just in LA or Everywhere? Feat. Celebs »