Like its inhabitants, Hollywood has zero goddamn shame. When it wants to tell you something, it tells you loud and fucking clear regardless of your emotional state and all-around well-being. Let me explain.

The first time Hollywood wanted to tell me something was about six months into moving here. It wasn’t so much telling as it was screaming. After shit circumstances caused me to unexpectedly quit my old job with nothing lined up, I was a hot mess, but I quickly got back on my feet, nonetheless. Within a few weeks, I scored two new gigs and even signed a lease on a brand-new apartment. But before I could even celebrate, I got laid off from one of my jobs. This was a day before I moved into my new (very expensive) place, by the way.

Read: I Moved to LA to Have My Ass Handed to Me

Hence, Hollywood’s first lesson for Taylor: You wanna survive here? Oh, and make your dreams happen in the meantime? LOL…

This time, Hollywood had another message in store. It really wants me to know I’m not famous. Like, not even a little famous. Or even close to a little famous. This all happened in a 48-hour period, by the way. I don’t have to be psychic for this vision to be clear AF. Here’s what went down:

Instance 1: After covering a red carpet, there were shuttles to the after party. But because Hollywood is a town run on status and botox, there were separate shuttles for the celebrities and “guests.” The celebrity shuttles were coming every .25 seconds while the line for the guest shuttle was from here to Mississippi. Eventually, I said fuck it and confidently walked into the celebrity shuttle area. If I looked like I belonged, they wouldn’t question me, right? Wrong. I was close-lined and sent back to the guest line.

Instance 2: I should probably tell you about my experience with valet, which happened before we even got to the point above. In short, I got in a full-on brawl with the valet crew because they were set on the fact that I wasn’t supposed to park in valet, but rather at a Trader Joe’s five minutes away. Because I’ve already had it with LA at this point, I straight-up called the event publicist and had her confirm my valet spot, through my car speakers with the volume cranked. Are we good, valet guys? Fuck.

Instance 3: At the end of the after party, one other dude and I were sitting in a shuttle on our way back. Before we left, an event worker peeped inside, quickly surveyed us, and said to someone outside, “This isn’t a talent shuttle, it’s a guest shuttle.” So it’s that obvious I’m not a celebrity, huh? Alright then.

Last but certainly not least, Instance 4:

Getty Images put up a photo of me and Niecy Nash from my time interviewing her for the new show Claws. I should be pumped, right? I was, until Getty killed what was left of my dwindling ego. This is the photo: 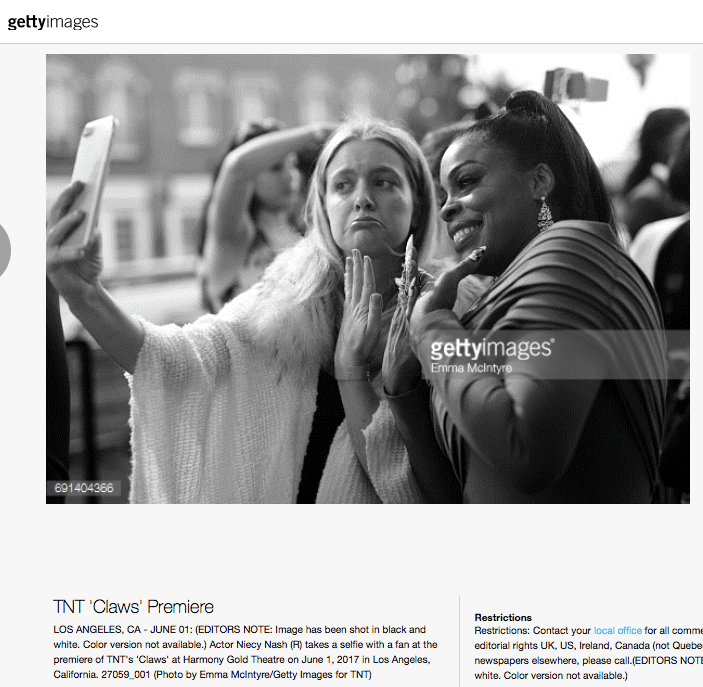 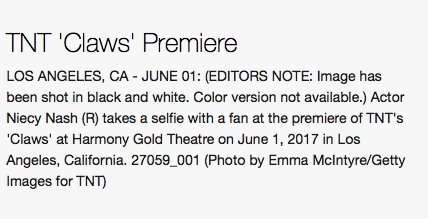 And the part about me:

Never mind am I of “blogger,” “personality,” or full-name-basis status. I’m not even “reporter” status, you guys. Just a “fan,” apparently.

So yes, I get it, Hollywood. I’m very clearly not famous nor recognizable and I have a long-ass way to go. Any other notes before I just go to the top of Runyon and contemplate life? Might as well tell me now while it’s all still super fresh.