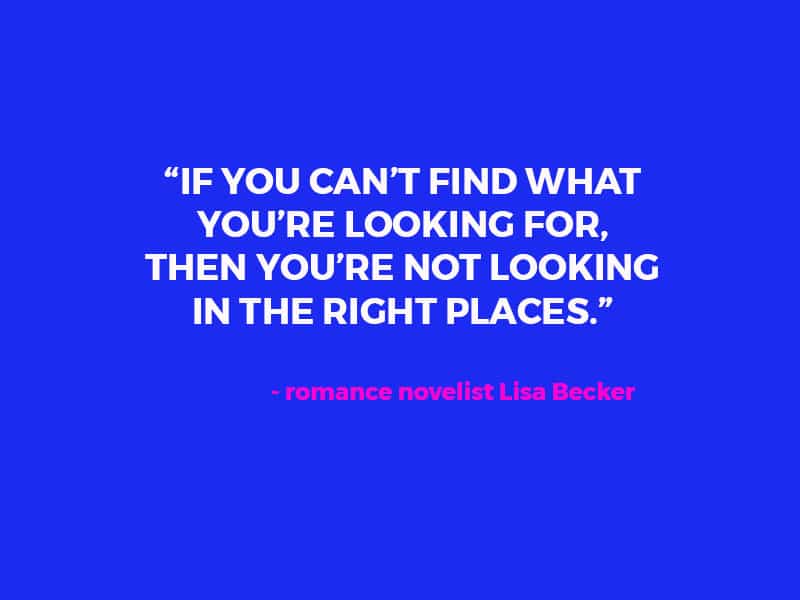 Desperate isn’t a cute look. We’ve all heard the cliched dating advice in the vein of: When you stop looking, it’ll come to you. But are you guys actually listening? I feel like you’re not. I hate nothing more than to see my friends and people I love bend over backwards to make things convenient for a guy out of fear. They overanalyze two-word texts, literally move to a new place to meet someone, and take obviously uninterested cues as a sign of future marriage.

It’s getting out of control.

Take some advice from romance author Lisa Becker (who wrote the book Links) — she met her husband, after she was 30, ONLINE 17 years ago, and they’re still happily married. I ask Lisa for insight for the jaded guy/girl (because that’s all of us). Here’s what she has to say, and after telling me that it’s worked in her favor and multiple friends’ favors, it’s worth taking into consideration.

Read: The Psychology Behind Affairs

Just force yourself to be over it.

“It’s gonna sound weird. My advice is to give up. Give up the idea that you’re going to meet someone to ‘complete’ you. I know we all swooned when Tom Cruise said that in Jerry McGuire. The idea of having to complete someone else terrifies me, because it’s so much pressure.”

Revolving life around meeting someone is the worst mistake.

“Whether you’re 20, 40, or 80, do you want to spend the rest of your life being miserable and feeling lonely? Or do you want to live your life? I want someone to fit into the life that I’ve created for myself. I don’t want to be dependent on someone else for my whole happiness that if they then go away, I’m miserable.”

You will send people running if you look desperate. (But you know that, right?)

“When you’re focusing on being happy, not necessarily who’s going to make you happy, you’re gonna be more attractive and interesting to someone else. The idea that somebody is so desperate to come in and fill a void in their life is a lot of pressure and isn’t a great foundation for a relationship. Ones based on that, I don’t think succeed.”

Fuck the checklist. (You know what I mean.)

“We grow and our priorities shift over time. Maybe as women in their twenties progress and get older, their checklist gets longer. And then sadly I think as they get even older, their checklist of what was acceptable to them gets smaller because they realize that some of the things they were looking for that they thought were priorities really aren’t all that important in the grand scheme of life.”

You are not going to change him, dating culture, or how the world works.

“You need to reevaluate what you’re doing. You’re not gonna be able to change anybody else out there. You can only change how you respond to what’s going on. If you can’t find what you’re looking for, then you’re not looking in the right places.”

Lisa makes her point by telling me three kickass real-life stories. When Lisa was approaching 30, she wanted to own a home with or without a man. She went for it and just before closing the deal, she met her husband. Her one friend, who met an Australian man at a bar, moved to Australia, and has been married to him since. And her other friend, who was turning 40 and felt depressed because she wanted a baby — she adopted one and just before the adoption process was finished, she met her husband.

What do these women all have in common? They were living their damn lives. And think of it this way: If a guy was acting desperate towards you, would you find that attractive? Because I know I’d go sprinting.