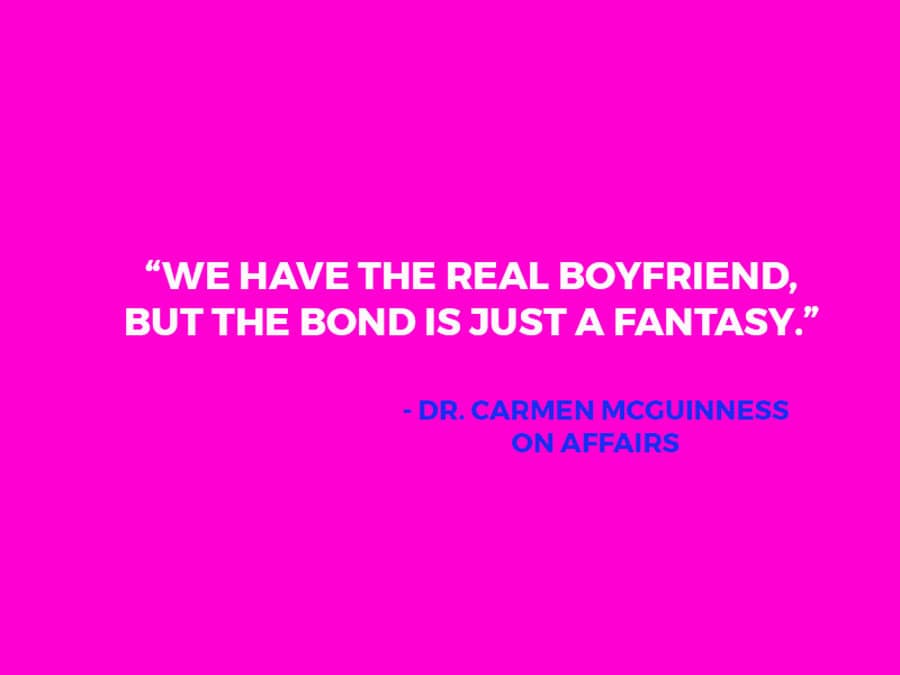 You would think that my experience in an affair would make me implode at the word, but it actually made me damn near fascinated by affairs and why people get in them. Mind you, it was well over a year ago and I’ve long since moved on. I knew that getting caught up with a married man was wrong, I knew it was a cliche, I knew it wouldn’t end well. I’d be lying if I said I didn’t have a small sense of hope.

My friends and family warned me and if I were them, I would’ve 100 percent done the same. Maybe I was naive, but my unparalleled feelings and thoughts of “What if?” made the emotions ones I couldn’t ignore. And while it ended how you would think, because it usually always does (the numbers prove it), I don’t regret a thing.

Instead, I want to understand why it happens. And often, it’s psychological.

Because many other women, and men, experience this, and probably don’t feel confident enough to talk about it. Why? Because they’re judged.

I know I was judged.

Relationship expert Dr. Carmen McGuinness, who also speaks freely about her experience with a married man and wrote the psychological romance Unintended Consequences, helped me understand the psychology behind getting caught in affairs. First of all, women aren’t always “homewreckers.” (And why the fuck aren’t men ever called homewreckers?) The emotions can really be overpowering. Young women may often by intrigued by and succumb to unavailable men (and vice versa) because of a few things.

“It feels very intense because to you, as the single woman, you feel like, ‘Wow. This guy is taking a real risk here to be with me.’ His attention toward you initially has to be like a laser beam at you because everybody else has to be tuned out of this. It has to be obvious to you that he’s interested without letting anybody else see what’s happening in the room. That has a whole different feel to a typical onset of a relationship.”

SO true and spot-on. I remember we would send instant messages throughout the entire workday, constantly text, call, and even Facetime. And it was that much more exciting because no one could know and because his attention was all on me which made it so much more intense.

“Basically, it was proposed by PhD Robert Firestone and largely accepted by relationship therapists. Because what society places upon us, the child knows they should have secure attachment, so they start to imagine a secure attachment. The same goes in a male-female relationship. ‘Everything is perfect here. Yeah, I know he’s married, but it’s a perfect relationship other than that one thing.’ It’s a fantasy. We have the real boyfriend, but the bond is a fantasy, the bond is not really there. It might feel like it’s there, but the deep commitment, bond is not there.”

I didn’t have absent or uninvolved parents, which is what the attachment theory suggests. But I can say that I certainly created this bond (which was largely a fantasy) in my head. It’s like playing house. Maybe because on some level, I knew I wasn’t totally ready for a monogamous, committed relationship, so this gave me the best of both worlds. Or maybe I knew it wouldn’t ultimately work out in the end. But she’s right, it feels like it’s there when it’s not. We may have had the passion, but were we in bed together at night? Paying bills together? Living a life together? No.

3. What we can control

“Part of the Fantasy Bond idea is that we seek out partners who can manage… You’re gonna be more likely to get involved with somebody who, when you do that thing you used to do, that person rolls over and you’re gonna be drawn to them because you can manage them.”

The truest. I had this guy wrapped around my finger, as ironic as that sounds. He’d drop anything to come see me, get depressed if I was upset with him, etc. And although the situation was somewhat uncontrollable, I knew I had a weird control over him.

Women get in affairs, and I don’t think it’s fair to write them off or judge. Yes, our lives are always in our control, but managing emotions and walking away is easier said than done, especially when you consider the aforementioned effects. Nothing here is particularly groundbreaking, which Dr. McGuinness and I know. But if it could help understand yourself, or others around you who have been in affairs a little better, that’s a mission accomplished.